The town of Bray is twinned with the towns of Werzburg, Germany ; Begles, France; and Dublin, California.

Every year, delegates representing the town of Bray, including members and staff of Bray Town Council, pay visits to and host their counterparts in France, Germany and the US.

These visits help promote Bray and its image abroad, and foster important links between Ireland and other nations.

Some information about the towns

Werzburg is located in Bavaria, Germany. Situated on the Main river, it is the capital of the region, the Regierungsbezirk Unterfranken.

Wrzburg has strong links with Ireland. Although it dates to about 1000 BC, it was christianised by the Irish Missionary St. Kilian in 689. Today, the city is an administrative centre, and contains a large university. It is also widely rec ognised as a beautiful city, with many stately buildings; including a UNESCO World Heritage Site.

As the name suggests, Dublin California also has strong links to Ireland. Many of its 30,000-odd inhabitants are American Irish, and the town maintains some strong Irish traditions, including its highly praised annual St. Patrick’s day celabrations.

Dublin has some very interesting preserved historical sites, such as the Murray schoolhouse and Saint Redmond’s church, mostly dating from the nineteenth century. A major road, the Dublin Boulevard, was part of the Lincoln highway – the first coast-to-coast highway in the US

Begles is a town with a population of about 25,000. Due to its close proximity to Bordeaux, Begles has access to excellent amenities such as a university and excellent transportation facilities including airports, railways and roads.

Begles is located in the heart of the famous Aquitaine region; an area renowned for its wine, rivers and tourism. Many of the worlds most renowned vineyards are located within a stone’s throw of the town. Begles is also very close to the Dordogne, an area of great natural beauty. The nearby Atlantic coast offers many more activities as well.

Welcome to the official website of Bray Municipal District. This site offers information on council activities, documents and forms for you to download and up to date news.

The town of Bray is located in North East Wicklow, just South of Dublin. Bray is often known as “The Gateway to the Garden of Ireland”; and is the third largest town in Ireland with a population of nearly 32,000.� Bray is also a Fair Trade Town.

Bray is Ireland’s longest established seaside town and traditionally has thriving tourism. Available in the immediate locality are fifteen 18-hole golf courses, a tennis club, a sailing club and horse riding. Other features of Bray are the Mermaid Arts Centre on Main Street, and the aquarium on Strand Road. Bray has a safe beach of sand and shingle to walk on, which is over 1.6km (1 mile) long, fronted by a spacious Esplanade. The scene is dominated by Bray Head, which rises steeply (241m/790 ft) above the sea, affording views of mountains and sea. The name of the town means “hill, rising ground”. 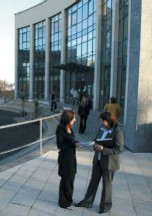 Bray Municipal District is the local authority governing the town of Bray. It consists of twelve elected Councillors who create policy for the Council, which is then carried out practically by the administrative / executive / technical staff, led by the�District Manager.

Bray Municipal District has played, and continues to play, a pivotal role in encouraging, assisting and supporting the economic and social growth of the town. The Town Council’s role in providing the necessary infrastructure to facilitate development has been significant in underpinning the sustainable economic and the social development of Bray.

Keep up to date with Bray Municipal District

To receive text alerts about water shut downs, road closures, emergencies and events text BRAY followed by your name and address to 51500. To opt-out of this service just text UNSUB BRAY to 51500.